A Tennessee high school athlete was disqualified from a volleyball match for wearing a hijab, prompting calls for a statewide rule change.

Najah Aqeel, a freshman at Valor Collegiate Prep in Nashville, was warming up for a match on September 15 when her coach said a referee had refused to let her play due to her headscarf.
The referee cited a casebook rule requiring athletes who wear a hijab to be granted authorization from the Tennessee Secondary School Athletic Association (TSSAA). Najah, 14, said she did not have authorization, but that it wasn’t an issue for previous matches.
Faced with the choice to remove her hijab or sit out the match, Najah decided not to play. Most Muslim women who wear the hijab only remove it in the presence of other women or immediate family members.
“I was angry, sad and also shocked just because I had never heard of the rule before that,” Najah told CNN. “The rule has no business being in the casebook. It singles out hijabis. I don’t see why I need approval to wear my hijab when it is a part of my religion.”
Karissa Niehoff, executive director for The National Federation of State High School Associations (NFSH), which sets competition rules for most US high school sports, told CNN that the uniform guidelines are not hard rules, and that states can make exceptions.
“We are heartbroken and deeply sorry that the young lady was disqualified from the match for wearing the hijab,” Niehoff said.
“More common sense should have been demonstrated by the adults. The correct approach the referee should have taken is to have allowed the young lady to play and point out after the game that next time she needs to submit a letter.”

NFSH provides specific guidance on uniforms.
“The player must have authorization from the state association to wear the hijab or other types of items for religious reasons as it is otherwise illegal,” according to the NFSH Volleyball Casebook. 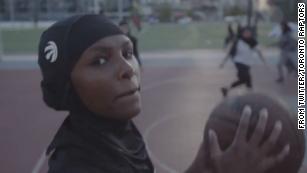 Toronto Raptors are selling a team-branded hijab
Niehoff said NFSH is preparing to introduce new language to its casebook pertaining to religious headwear so that it will no longer be an issue in the future, unless it poses a danger to the player or other athletes.
Cameron Hill, athletic director at Valor Collegiate Academies, told CNN the school was unaware of the rule that prevented Najah from playing, and characterized it as “antiquated and oppressive.”
“We want our state to make it understood that there is no need for Muslim women to get permission to wear their religious headwear,” Hill said. “This rule is discriminatory and inequitable. We stand in solidarity with all of our scholars and families and their freedoms to express their religion freely and openly.” 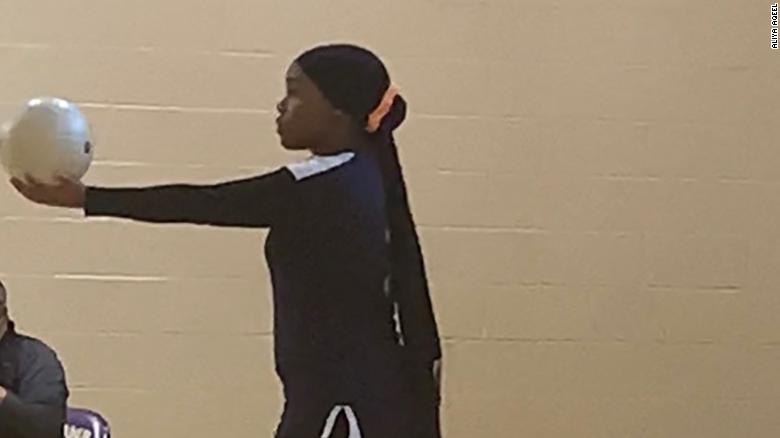 Najah playing volleyball in her hijab.
Hill said Valor Collegiate Academies has since drafted language they will propose to the TSSAA in hopes of issuing an exception to the rule.

An issue of Constitutional rights

Sabina Mohyuddin, executive director of the American Muslim Advisory Council, told CNN she is helping the Aqeel family resolve the matter. She says it’s an issue of Constitutional rights.
“Why should Muslim girls, who want to follow their constitutionally protected right, have an extra barrier to fully participate in sports in Tennessee?” Mohyuddin said in a statement. 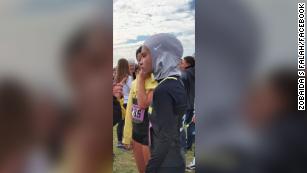 A high school athlete ran her personal best but was disqualified for her hijab
“This rule was used to humiliate a 14 year old student in front of her peers. It was traumatizing to say the least. We have Muslim girls across the state playing sports. Religious barriers to playing sports should not exist in this day and age. This rule is akin to telling Muslim girls that they need permission to be a Muslim.”
In a letter to Mohyuddin, a lawyer for TSSAA said its rules “are not written with the intention of discriminating against anyone.” Rather, they are written generally so as to not burden game officials with “a multitude of ad hoc decisions about what is or is not permitted, a completely unworkable situation that would lead to arbitrary distinctions.”
Richard Colbert, the lawyer, said Najah could have been allowed to play had the referee not enforced the rule or had her coach sought TSSAA authorization first.
When reached for comment, the TSSAA forwarded CNN the same letter.
Bernard Childress, TSSAA executive director, later sent CNN a statement saying the association would ask its Legislative Council to issue an exception to the rule for the hijab.
PrevPreviousCharles Barkley’s Breonna Taylor Slander Is Latest Proof He’s ‘Not A Role Model’
NextMEAC granted playoff autobid, sets title gameNext