Joe Biden‘s yet-to-be-named presidential cabinet could very well just come down to being a case of basic math.

The President-Elect has vowed to assemble a group of executive leaders for the government’s federal departments that “looks like America,” an ambiguous pledge that, between the lines, carries the connotation of appointing people who reflect the evolving racial makeup of the United States’ ever-browning population. Making the moment a bit more significant is the fact that Biden served as second in command to the nation’s first Black president, heightening expectations — whether fair or not — for multiple African Americans to serve in key cabinet roles.

Complicating matters, though, is the fact that Black folks make up just 13 percent of the U.S. population, a statistic that suggests Biden could keep his word by appointing just two Black people, which is just about 13 percent of the 15 cabinet positions.

Louisiana Rep. Cedric Richmond officially joined the Biden administration Tueaday after it was announced he would serve as a senior adviser to the president and director of the White House Office of Public Engagement. While that is not a cabinet position, Richmond’s appointment may just be the beginning of a so-called Black wave of top Biden advisers who are African American.

As it stands now, Donald Trump has had just one single Black person on his cabinet fr his entire first term. But Ben Carson, secretary of the Department of Housing and Urban Development, has left plenty to be desired in that position, to put it mildly, possibly placing pressure on Biden to not just replace him with a competent HUD secretary but also one who is Black. In fact, considering Trump has been openly racist against Black people while camouflaging that truth by nominally championing criminal justice reform and touting low Black unemployment numbers he inherited from President Barack Obama, Biden could potentially feel the pressure to name more than just two Black people to lead multiple cabinet positions after Black voters came out in historic numbers to help secure his election win.

Biden’s win has already made sure the country will have its first Black vice president, a post that has never been held by a woman until Kamala Harris is sworn-in to the post in January. He’s also vowed to name a Black woman to be a Supreme Court Justice if he gets the chance.

Now, as the Trump administration all but disintegrates into irrelevance during Trump’s lame-duck period of his presidency, people are looking to the future to see who will be Biden’s most trusted advisers and lead the 15 cabinet departments past the ruins in which they’ve effectively been left.

And while ongoing nationwide protests against racism and police violence are demanding racial equality, there may not be any bigger stage for that to happen than the one on which Biden announces who he’s decided to nominate to serve in his cabinet. As such, scroll down and keep reading to find the names of Black people who are not only rumored as being under consideration but also the roles for which they’re reportedly being considered. At the end of the day, one thing is abundantly clear that cannot be said about the outgoing administration: They’re all fully competent. 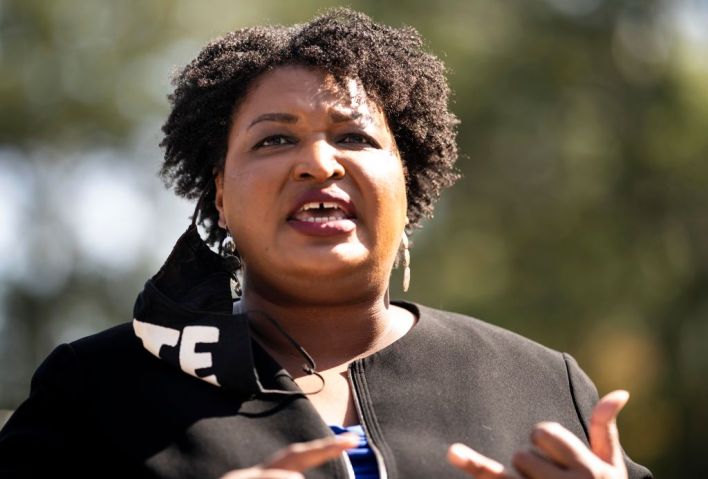 Source:GettyIncluding Stacey Abrams in Joe Biden’s administration is a no-brainer. Many folks have credited her voting rights organization Fair Fight’s groundwork in Georgia for flipping the state blue for the first time in 30 years with election results that all but sewed up Biden’s historic election. But it’s unclear whether that is something she would be interested in.

While Abrams did express interest in the prospects of being Biden’s vice-presidential running mate, her talents may not be best used in the cabinet, some folks have suggested.

Democratic leadership may see her true value in helping to turn out voters not just immediately in the Senate runoff elections in Georgia, but also nationally ahead of the 2022 midterm elections.

Either way, she would be nothing but an asset to Biden’s administration, even though she has not been associated with any cabinet role in particular. 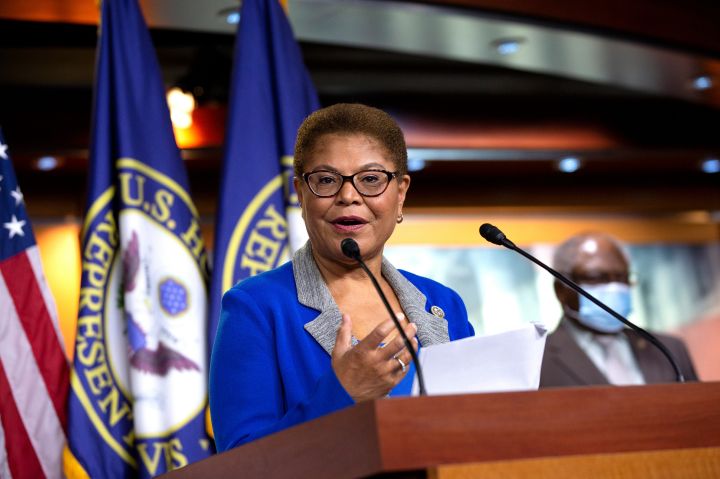 Source:WENNThe New York Times reported that Karen Bass, who was also on Biden’s shortlist of people he was vetting to be his VP pick, was a top contender to lead the Department of Housing and Urban Development. The Congresswoman who represents Los Angeles just recently won her re-election and remains the Chair of the influential Congressional Black Caucus. 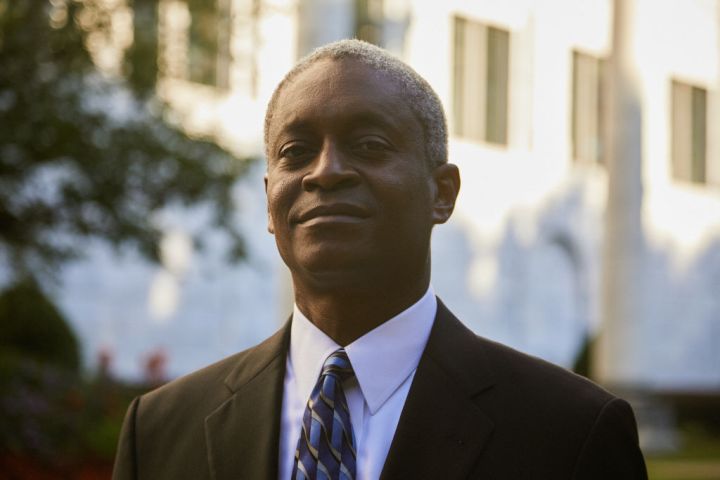 Source:GettyRaphael Bostic, the first African American president of one of the 12 Federal Reserve regional banks, is under consideration to be named to lead the Treasury Department. He was appointed to the Federal Reserve Bank of Atlanta as its president and CEO in 2017 in part because of a lack of diversity.

“It’s not lost on me that I …am the first African American to lead a Federal Reserve institution,” Bostic, a professor at the University of Southern California, said at the time. “It’s kind of daunting. It’s an overwhelming thought. It’s a tremendous privilege. I look forward to this being a stepping stone for many others to have this opportunity as well.”

That same quote could very well apply if he is nominated to be the Treasury secretary. 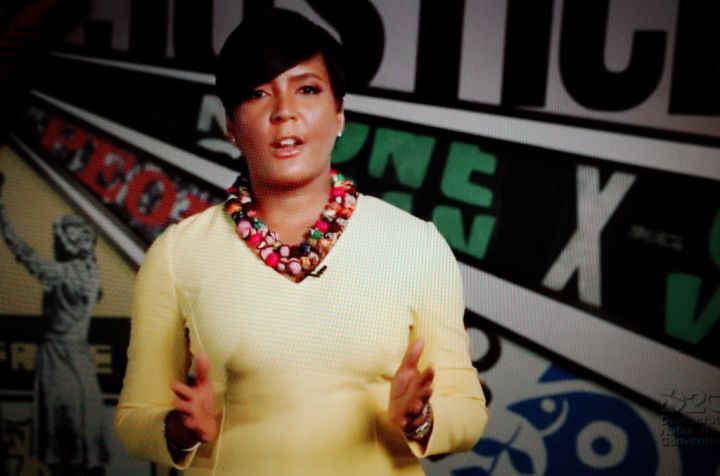 Source:GettyAtlanta Mayor Keisha Lance Bottoms, reportedly being considered to lead HUD, has increased her Democratic profile in recent months following both attacks from the president and her role in helping to turn out voters in Atlanta who are credited with helping to cast the ballots that pushed Biden past Trump in the presidential election.

IN terms of her qualifications for the role, the New York Times reported that she “made affordable housing a priority, proposing a $1 billion public-private initiative to improve access to housing in Atlanta. 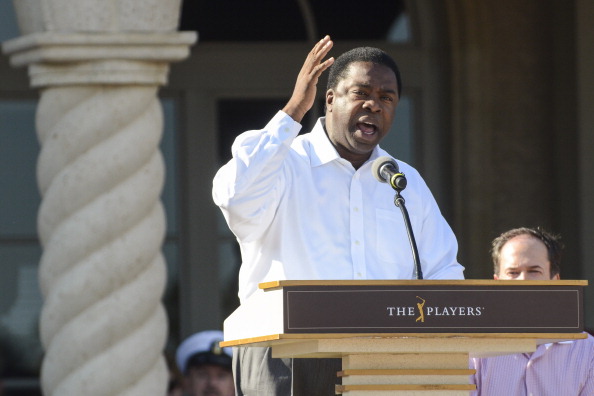 Source:GettyFormer Jacksonville Mayor Alvin Brown already has HUD and other presidential cabinet experience under his belt, the New York Times reminded readers. Not only was Brown “an adviser to Andrew Cuomo during his tenure as secretary of housing and urban development” but he also “worked on the Clinton-Gore transition team, and served at the Commerce Department during the Clinton administration.” 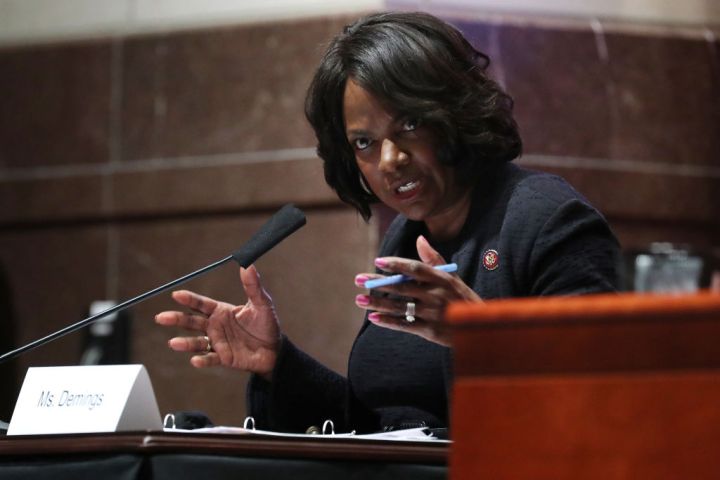 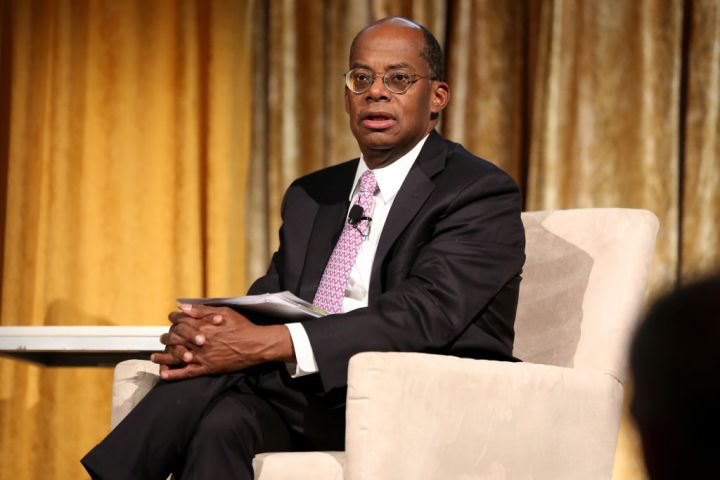 Source:GettyRoger W. Ferguson Jr., the President and CEO of TIAA-CREF, the national pension fund for teachers, is reportedly being considered to lead the Treasury Department. He is also a former Federal Reserve vice chairman and governor and one of the multiple Black people reportedly under consideration for the role. 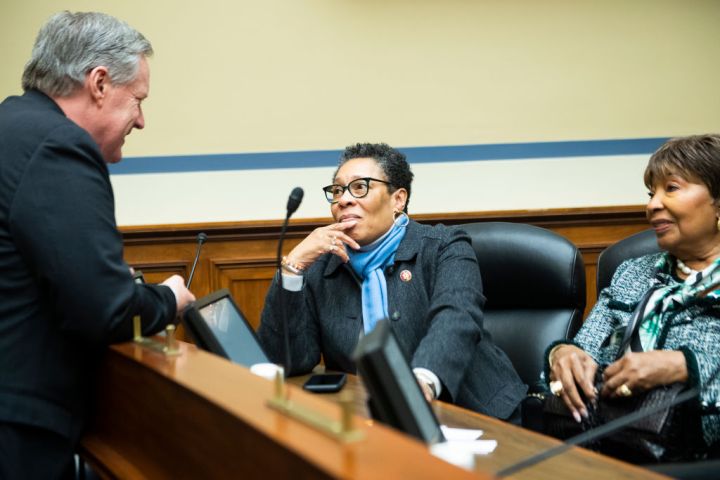 Politico reported that Fudge “has made increasing food stamp benefits through the Supplemental Nutrition Assistance Program a primary issue” and “been fiercely critical of the nutrition rollbacks at USDA and other actions there, including the approach to scientific research.” 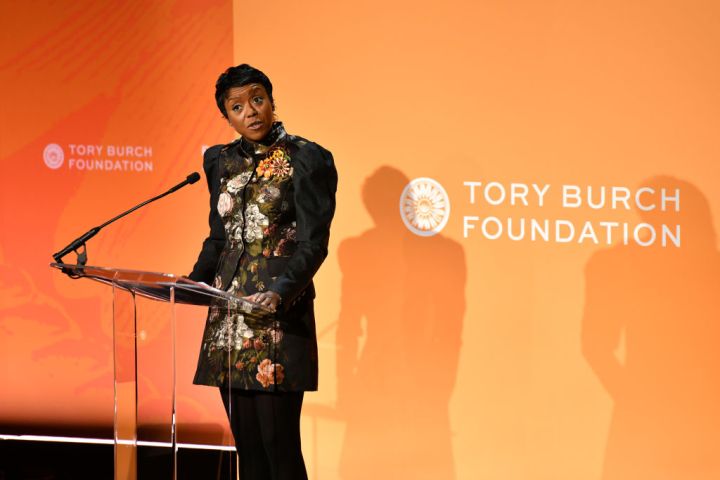 Source:GettyMellody Hobson, the President and co-CEO of Ariel Investments, is reportedly being considered to lead either the Department of Commerce or the Treasury Department.

Politico reported that the former chairwoman of DreamWorks Animation whose husband in film director George Lucas has “ties to the financial services sector” that “could rankle some progressives.” 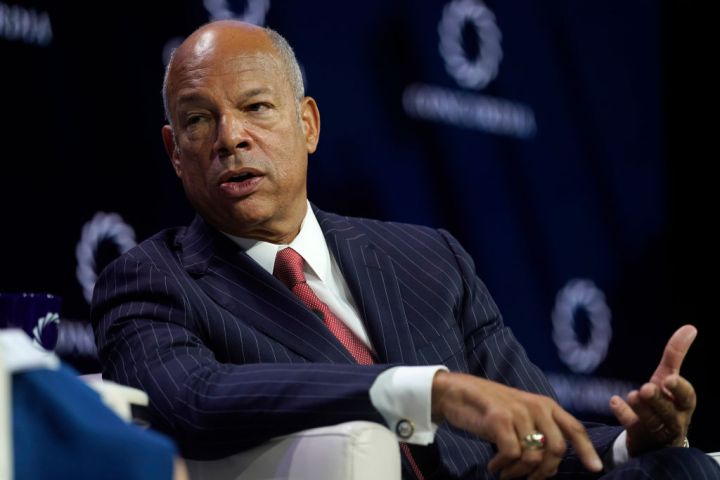 Source:GettyJeh Johnson, the former secretary of Homeland Security under President Barack Obama, is reportedly in the running to either lead the Department of Defense or become the next Attorney General or Director of National Intelligence.

Prior to leading the Department of Homeland Security, Johnson was a highly accomplished lawyer who served as General Counsel of the Department of Defense from 2009 to 2012 during the first Obama Administration. He’s also a graduate of Columbia Law School and Morehouse College.

Maurice Jones is being considered for the top HUD post.

The New York Times reported that Jones was a “top deputy at the department during the Obama administration” who “currently runs the Local Initiatives Support Corporation, a financial institution that makes loans and provides grants to assist underserved communities.”

Jones is also the former Virginia secretary of commerce. 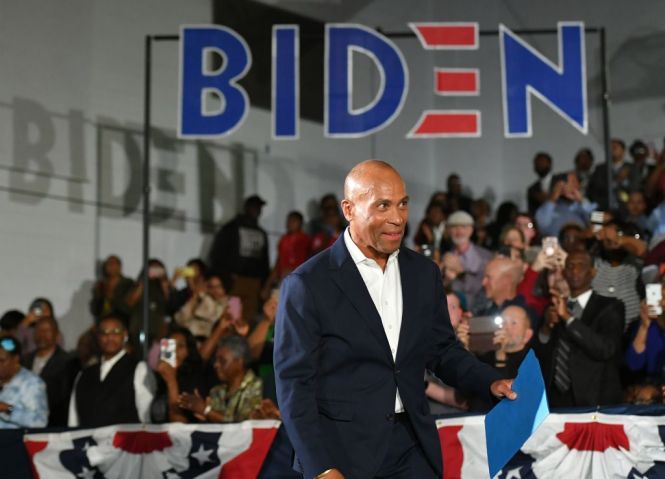 Source:GettyFormer Massachusetts Governor Deval Patrick is among those being considered by Joe Biden to be the country’s top cop as the U.S. attorney general, according to NPR, which first broke the news.

Patrick, 64, who started his career as an attorney, went on to become the assistant attorney general for civil rights in the Justice Department in President Bill Clinton’s administration from 1994 to 1997.

He launched a brief, unsuccessful presidential bid just about a year ago before quickly suspending it.

Patrick, originally from the Southside of Chicago, was the first African-American to become governor of Massachusetts, which was from 2007 to 2015. He was also an early supporter of Barack Obama‘s initial presidential ambitions. 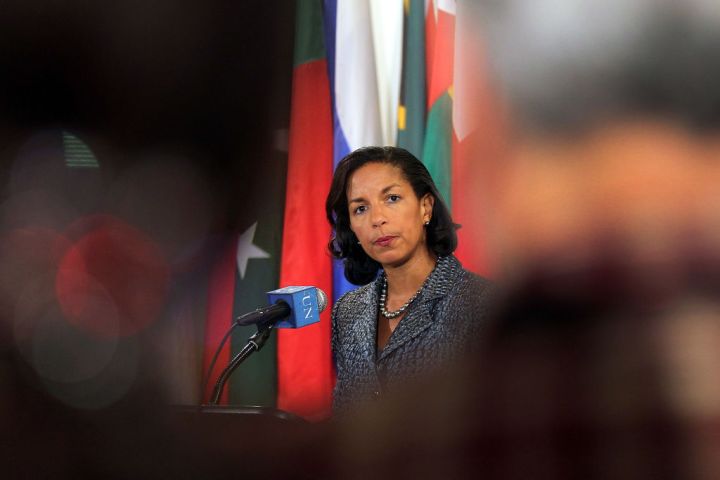 Source:GettySusan Rice is reportedly being considered for Secretary of State, a position that requires the type of foreign policy leadership experience she displayed while working as the U.S. Ambassador to the United Nations and National Security Adviser under Obama.

She was also under consideration to be Biden’s vice-presidential running mate before he chose Harris.

While White House press secretary is not considered a cabinet-level position, it is still a high-profile role nonetheless that has never been filled by a Black person. Symone Sanders, a political strategist and cable news analyst, recently served as senior adviser for Biden’s presidential campaign.

Sanders’ supporters playfully floated the idea that she could make an effective Secretary of Defense in March when a protester ran onstage during a speech Biden was giving in Los Angeles. After security pulled the protester away, a second protester rushed the stage, prompting Sanders to act quickly and drag her offstage.

Bill Spriggs, the chief economist at the AFL-CIO conglomeration of labor unions, is reportedly being considered to lead the Department of Labor. His qualifications for the role are bolstered by the fact that he is also a former assistant secretary of Labor and a professor of economics at Howard University.

Heather McTeer Toney, the senior director of Moms Clean Air Force, was reportedly in the running to lead the Environmental Protection Agency. Politico described her in part as “a clean air activist” who is also the former regional director of the EPA’s Southeast Region. 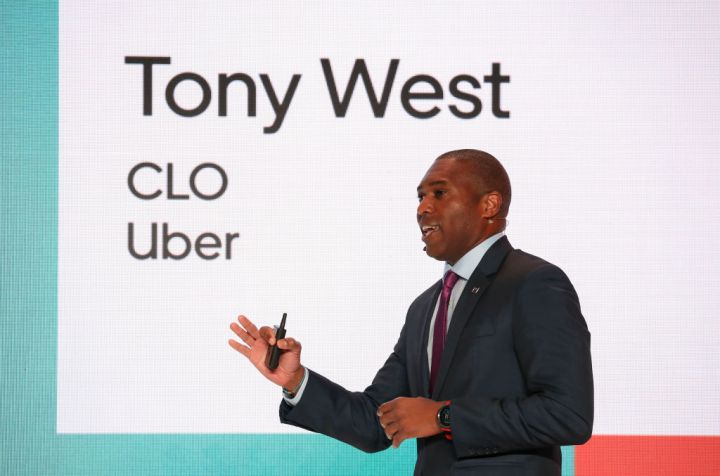 Source:GettyNPR reported that Tony West was among those being considered to serve as the U.S. attorney general, a position the current chief legal officer for Uber knows something about. The career lawyer served as the Associate Attorney General of the United States from 2012-2014 in Barack Obama‘s administration. That made him the third­ highest-ranking official in the Department of Justice.

According to his official bio, in that role, he “supervised many of the department’s divisions, including the Civil Rights, Antitrust, Tax, Environment and Natural Resources, and Civil Divisions, as well as the Office of Justice Programs, the Office on Violence Against Women, and the Community Oriented Policing Services Office. As Associate Attorney General, Tony pursued several financial institutions for their roles in precipitating the 2009 financial crisis, securing nearly $37 billion in fines and restitution for Americans who were harmed.”

There is one glaring elephant in the room that may prevent him from Biden nominating him, though. He is the brother in law of Vice President-Elect Kamala Harris, which critics might say is a conflict of interest.

Apparently, there is no place in America a Black person can go without experiencing racism—not