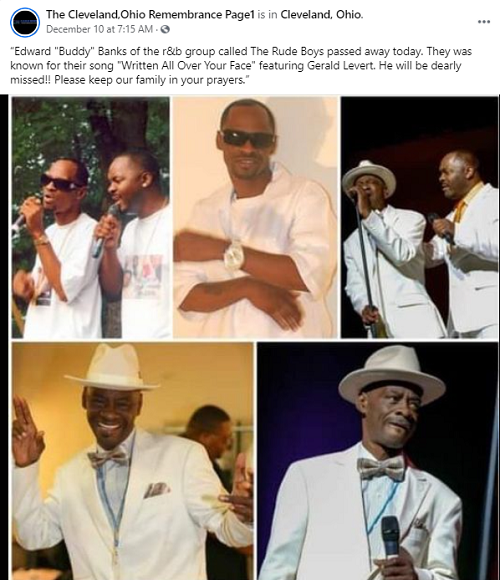 (December 12, 2020) We are sad to report to SoulTrackers that Edward “Buddy” Banks, a founding member and keyboardist of 90s R&B hitmaking group The Rude Boys, has died. The Rude Boys were best known for the 90s hit “Written All Over Your Face.”

As if to prove that they were not a “one hit wonder,” the Boys followed with another #1 hit, the wonderful ballad “Are You Lonely For Me,” and continued their hot streak with a major international tour supporting Levert and The O’Jays. An important footnote is that, at this time, the group’s keyboardist and musical director was future soul music star Frank McComb.

The Rude Boys issued a follow up album, 1992’s Rude House (which included the moderate hit “My Kinda Girl”), but it didn’t hit the heights of its predecessor album, and their stint with Atlantic Records was done. It led to a split of the group, though some of the members reunited five years later for the commercially unsuccessful album Rude As Ever.

Banks was a talented keyboardist and worked on Gerald and Eddie Levert’s hig Father and Son album, and later produced the act Men at Large. Buddy Banks’ time in the spotlight was brief, but folks will be listening to his powerful music for decades to come. Rest in peace.