(CNN)President Donald Trump once again drove the dignity of the American presidency into the ditch this week by raising a false and racist conspiracy theory about Kamala Harris, elevating the efforts of the alt-right to portray her as “other” because of her mixed-race heritage.

It was not surprising that Trump would try to exploit Harris’ background for personal gain given that he is running the most racially-charged presidential campaign that America has seen since the 1968 run of former Alabama Gov. George Wallace.
After all, he elevated his own stature from the realm of a New York gadfly to the mainstream of American politics by trafficking lies about the eligibility of President Barack Obama, who was the nation’s first Black president. 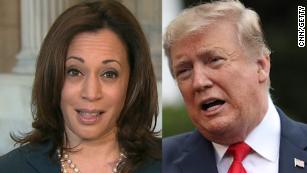 Trump reverts to stereotypes as campaign fumbles to respond to Harris pick
But it was a sickening spectacle to watch the President of the United States use a podium at the White House to question whether the presumptive Democratic vice presidential nominee — who was born in Oakland, California, and is the first Black and South Asian American woman on a major party ticket — might somehow be ineligible for the post. It was a clear attempt by Trump to stir controversy and divert attention from his inept handling of the coronavirus pandemic and the more than 168,000 American deaths.
Content by CNN Underscored
Is it time to refinance your mortgage?
Understanding the mortgage refinance process can help you make an educated decision as to whether a refinance makes sense for you.
After Trump first dangled the theory Thursday in response to a reporter’s question, during what was billed as a press briefing, his son-in-law Jared Kushner and Marc Short, the chief of staff to the vice president, stirred more aspersions about Harris’ background on Friday in two different interviews.
When asked whether he believes Harris is a qualified candidate for the vice presidency, Kushner said, “I personally have no reason to believe she’s not,” but said the theory was “out there.”
View Trump and Biden head-to-head polling
The question about Harris’ eligibility was raised by Chapman University professor John Eastman in an opinion piece in Newsweek. (Eastman, a Republican, ran for California Attorney General in 2010 but was defeated in the Republican primary; Harris won the Democratic primary and ultimately won the race.) 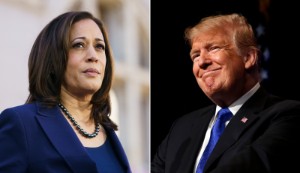 Fact check: Trump promotes another birther lie, this time about Kamala Harris
Kushner, who is both a White House and a campaign aide to Trump, pointed out that the President said “he had no idea whether that’s right or wrong” — a technique Trump often uses when he’s trying to shirk responsibility for spreading disinformation.
“I don’t see that as promoting it. But at the end of the day, it’s something that’s out there,” Kushner said in a morning interview with CBS News.
In a different interview Friday, Short then suggested that Harris has “imported” socialist policies “from overseas.”
“I think that we can celebrate the fact that a daughter of two immigrants has had such a celebrated political career, to be elected statewide and now be the nominee for the Democratic Party,” Short said during an appearance on Fox Business. “I think what’s more concerning is some of the socialist ideas she seems to have imported from overseas as well.”
At a Saturday news conference from his Bedminster, New Jersey, golf club, Trump again praised Eastman, calling him a “brilliant lawyer,” and although he said he wouldn’t be “pursuing” questions about Harris’ eligibility, he didn’t refute the conspiracy theory either.
“I know nothing about it but it’s not something that bothers me,” the President said. “I just don’t know about it, but it’s not something we will be pursuing.”
But even before Trump’s comments earlier this week about Harris, the daughter of Jamaican and Indian parents, Trump had centered his campaign on his efforts to create fears of “otherness” in the hearts of White Americans.
He cast peaceful demonstrators in the streets after George Floyd’s death as “THUGS” and criminals. He has repeatedly made appeals to suburban White voters, specifically women he describes as “Suburban Housewives,” warning that polices created by the Obama-Biden administration to dismantle segregation in housing will destroy their neighborhoods.
He told Wisconsin voters during a recent tele-town hall that those housing rules would bring “who knows into your suburbs.” And he has described the toppling of statues of Confederate generals and slave-owning figures from America’s history as an attack on the nation’s heritage and founding principles.
It’s a similar playbook to the one that he used as a candidate in 2016 when he tried to portray immigrants as criminals, and again in 2018 as he tried to protect the GOP’s congressional majority, claiming that dangerous caravans were headed across the US border with Mexico to terrorize Americans. (They never arrived).

The GOP responds with silence

It’s unclear why Trump and some of his allies believe that dragging Americans back into another baseless “birther” controversy about Harris will help his chances of staying in the White House.
While it’s true that many voters are firmly entrenched in their pro and anti-Trump camps, female voters in swing districts have told CNN in countless interviews over the past three years that they are exhausted by Trump’s divisive tactics — from his vilification of Latinx and Black Americans to his sexist remarks about women he does not like. (In a Fox News Poll released Thursday, Biden led Trump among women 51% to 39%).
Since Floyd’s death, growing majorities of Americans have also said they disapprove of Trump’s handling of racial issues — with two-thirds of Americans stating that Trump has increased racial tensions in a June NPR/PBS NewsHour/Marist poll.
Former Republican Rep. Charlie Dent of Pennsylvania told CNN’s Kate Bolduan Friday night it made “absolutely no sense” why Trump and his allies would want another smear attached to the Republican Party as they try to maintain control of the Senate and win back the House.
“This will further alienate many voters, Republicans, particularly in the suburbs, suburban women, college-educated voters and any voter who can read, because this charge is easily disproven because she was in fact born in California,” Dent said on “Erin Burnett OutFront.”
“So, I don’t understand what they’re thinking, how this helps. But it is maybe a dog whistle to the nativist element, maybe to try to drive them out.”
Harris’ Republican colleagues in the Senate mostly remained silent following Trump’s comments in the White House briefing room where he said he had “heard” that “she doesn’t meet the requirements” and then said, “I have no idea if that’s right. I would have assumed the Democrats would have checked that out before she gets chosen to run for vice president.”
South Carolina Sen. Lindsey Graham, a Trump ally whose reelection may be more competitive than expected, was the only GOP senator to tweet about the false ineligibility theory: “There is no issue as to whether or not she is an American citizen,” Graham wrote. “She was born in the United States in 1964 to parents who were legally present. Under the Constitution and Supreme Court precedent, she is unequivocally an American citizen.”

So far the Biden campaign’s approach has been to call out Trump’s new “birther” comments as a distraction, a line echoed by numerous Biden campaign allies and surrogates over the past few days.
Biden spokesman Andrew Bates said in a statement that Trump “has sought to fuel racism and tear our nation apart on every single day of his presidency.” 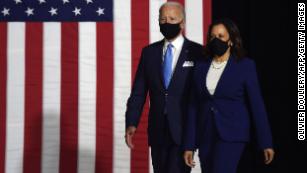 Kamala Harris just showed why Biden chose her as his running mate
“So it’s unsurprising, but no less abhorrent, that as Trump makes a fool of himself straining to distract the American people from the horrific toll of his failed coronavirus response that his campaign and their allies would resort to wretched, demonstrably false lies in their pathetic desperation,” Bates said.
Harris did not engage during a Friday appearance in Delaware to sign ballot-related documents when she was asked what she thought of the attacks from Trump and his allies since Biden announced her as his running mate.
“I’m signing this because I am in this race to win and with that guy right there,” she replied, gesturing at Biden. “And we’re going to get it done.”
House Speaker Nancy Pelosi, a Democrat, dismissed the President’s comments during a gaggle with reporters on Capitol Hill on Friday. “Why would you even talk about that? He is just taking attention away from the fact that he’s been a total failure in addressing the coronavirus challenge in our country,” she said.
“He can’t handle the fact that a woman of color has risen to this place and will soon be the vice president of the United States,” Pelosi said. “He’s intimidated by strong women, we know that. And for him to say what he said, and for you all to report it, is like the biggest waste of time.”
PrevPreviousJohn David Washington Explains Why He Used To Lie About Being Denzel Washington’s Son
NextR. Kelly’s Manager Charged With Phone Threats to TheaterNext