Thousands of President Donald Trump’s supporters of all stripes, including right-wing and far-right groups, rallied in Washington, DC, on Saturday to protest the election results.

Smaller groups of counter demonstrators gathered downtown and near the Supreme Court in support of President-elect Joe Biden’s electoral victory — which the President has falsely described as fraudulent.
Anti-Trump protesters clashed with law enforcement Saturday evening in downtown DC as they tried to make their way to a hotel where Trump supporters are staying. Police pushed them back about a block, and the crowd has now dwindled.
Many groups that attended the rally have distinct core beliefs, but on Saturday were united in their unwavering support for the President. They included anti-government groups such as the Oath Keepers, far-right groups such as the Proud Boys and the Three Percenters, conspiracy theorists such as Alex Jones and Republican members of Congress. 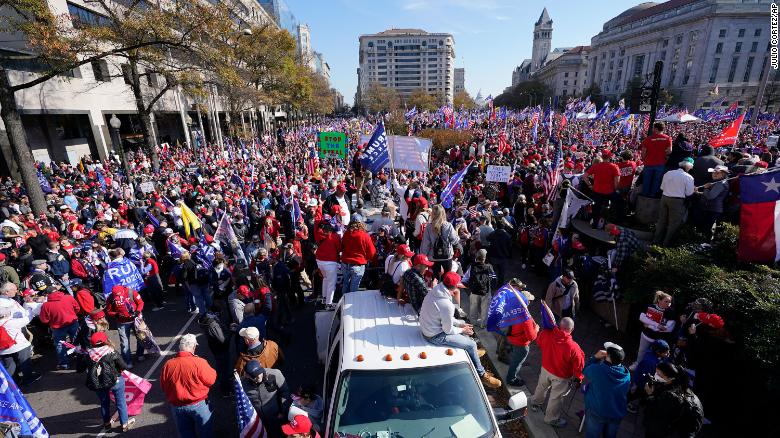 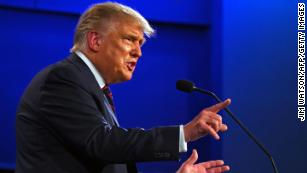 Trump refuses to condemn White supremacists at presidential debate
Trump took notice of the gatherings and tweeted on Friday that he might make an appearance. Before Saturday’s rallies, the President’s motorcade passed cheering and waving supporters on his way to a golf outing. 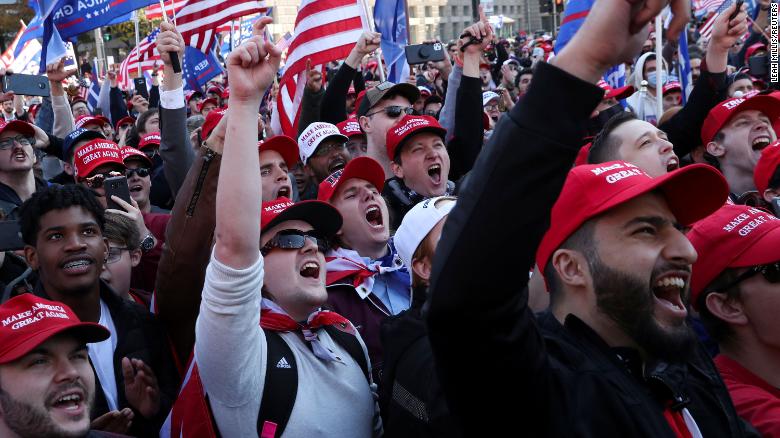 Throngs of “Stop the Steal” protesters gathered in Washington, DC on Saturday.
Mainstream conservative voices and elected officials such as Rep. Paul Gosar of Arizona and Rep. Mike Kelly of Pennsylvania were advertised as speakers for the “March for Trump” event.
The “Million MAGA March” announced its notable attendees would include conspiracy theorists and others like podcaster Nick Fuentes, who participated in the deadly 2017 Charlottesville “Unite the Right” rally, and Mike Cernovich, who pushed the “pizza gate” conspiracy theory.
Leadership and members of the Proud Boys, a far-right group that Trump asked to “stand back and stand by” during the first of two 2020 Presidential debates, were in attendance.
Ben Hovland, a senior federal election security official appointed by Trump, has called the President’s accusations of a rigged election “insulting” and “laughable.”
While there had been warnings of potential violence, the day was peaceful without any major incidents. Washington, DC police told CNN they made some arrests, but didn’t say how many.
To those who have been tracking far right and extremist groups for years, Saturday’s rally illustrates the thinning of a line between the mainstream right and far-right extremists. 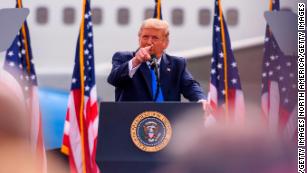 Trump again refuses to denounce QAnon
Oren Segal, vice president of the Anti-Defamation League’s Center on Extremism, said he expected the vast majority of participants to be there solely to show their support to Trump, but the event was an opportunity for extremists to be mingling with that demographic.
“There’s a platform there, there are pro-Trump supporters and conservatives, and people who want to express their support for this President, who are going to be mingling, if you will, with extremists,” Segal said.
Just as misinformation about the elections made its way from fringe platforms into the Twitter feeds of the President’s inner circle, Segal feared the Saturday march could have been its physical manifestation, spreading not only wrong information but hateful, extremist rhetoric.
“The fact that this sort of space is attracting those who buy into this idea that something is being stolen and taken away, and that extremists may be adjacent to them is a concern more broadly of the normalization of the extremists and of what could happen when you get a bunch of people together who are upset.”

CNN’s Ray Sanchez and Mallory Simon contributed to this report.

Judge of Characters: Confronting Racism Does Not Make You Racist

The Root is a platform that unapologetically confronts racism. But it seems that the racists