A few months after former Vice President Joseph R. Biden Jr. entered the 2020 race for president, the executive producer of the popular nationally syndicated radio show “The Breakfast Club” said that he and the hosts were in discussions with the Biden campaign about an appearance.

As summer wound down, it became apparent to the show’s three hosts, Charlamagne Tha God, Angela Yee and DJ Envy, that Mr. Biden would not be joining them.

“They offered to have a black surrogate on the show,” Charlamagne said in an interview earlier this year.

But the candidate’s unwillingness to appear on the show made Charlamagne feel uneasy, he said. It seemed to him that speaking directly to black voters wasn’t a priority for Mr. Biden, especially since nearly every other Democratic candidate had been a guest by the time Mr. Biden entered the race last year.

On Friday morning, Mr. Biden finally made it onto the show for a tense 18-minute interview. Handling hosting duties alone on the segment, which was broadcast on the show’s YouTube channel, Charlamagne asked Mr. Biden about marijuana legalization and the possibility of having a black woman as a running mate.

He also challenged Mr. Biden on his history with the 1994 crime bill. Mr. Biden spoke about his time as a public defender and reminded Charlamagne that he had been endorsed by the N.A.A.C.P.

All in all, Mr. Biden seemed defensive, but to have fared well through an interview that he managed to put off for nearly a year.

But in the final minute of the conversation, the gaffe-prone candidate had a misstep.

“If you have a problem figuring out whether you’re for me or Trump, then you ain’t black,” Mr. Biden said.

The social media response was swift and critical. To many black Americans, that comment seemed to confirm what Charlamagne thought when Mr. Biden offered to send a surrogate in his place: In their view, the presumptive Democratic nominee underestimates black voters, sees them as a monolith and takes their support for granted.

“Black people saved your political life in the primary this year, they have things they want from you, and one of them is a black woman running mate,” Charlamagne, whose given name is Lenard Larry McKelvey, said to Mr. Biden during Friday’s broadcast.

The Biden campaign declined to comment on the interview, its offer to send a surrogate on the show and how longstanding the invitation to appear had been.

Charlamagne has been critical of Mr. Biden throughout the campaign, saying on CNN in September that he appears to be “suffering from that same white entitlement and privilege and ego” and that he falsely assumes that black voters would support him no matter what.

Although neither the show’s producer nor the campaign would say when exactly Mr. Biden agreed to the appearance, Charlamagne, his co-hosts and the show’s producer said earlier this year that every presidential candidate knew the door was open, and had been since early in the primary.

“Everybody is welcome, we’ve said that to the campaigns,” Ms. Yee said, “But usually they reach out to us because they understand the importance of the platform.”

“The Breakfast Club” airs every weekday from 6 a.m. to 10 a.m. Eastern and from 7 a.m. to 10 a.m. on Saturdays on Power 105.1. Before the pandemic, its three hosts welcomed guests into their studio in Manhattan to discuss everything from music to celebrity gossip to politics. Many fans of the show listen to it on podcast apps, too.

Interviewees have been known to walk out if they don’t like a question. Even DJ Envy, a host, once walked out on the show. No one who enters the studio or, now, joins a video call with any member of the hosting trio is safe from commentary and criticism. And when the hosts upset listeners, people take to Twitter, where Charlamagne has been called out for his own gaffes and homophobic, transphobic and sexist comments.

In its nearly decade-long run, the show has created viral moments with rappers, actors, and politicians. As it has carved out a space for serious conversations about politics, it has become an important stop for candidates who desperately want to appeal to black voters. After all, it was on this show that Hillary Clinton said that she carried hot sauce in her bag, just like Beyoncé.

Mrs. Clinton appeared in April 2016, and since then the show has become an even more crucial campaign stop for presidential hopefuls who want to reach the show’s mostly black, young listeners and viewers.

The show has eight million monthly listeners on more than 100 stations nationwide and, according to Nielsen data, 70 percent of the audience is African-American and 10 percent is Hispanic. The show’s YouTube channel has some four million subscribers. Most of the listeners and viewers are under 45.

“Morning show radio, especially for communities of color, has always been a big portion of how we shape ourselves politically, how we talk about issues, not just political, but cultural issues, too, and I think ‘The Breakfast Club’ has carved out a really special niche in being very emblematic of that,” Representative Alexandria Ocasio-Cortez, Democrat of New York, said in an interview at the show’s studio after her own appearance in February.

Andrew Yang, Julian Castro, Marianne Williamson, and Senators Elizabeth Warren, Bernie Sanders, Cory Booker and Kamala Harris all appeared on the show at least once while running for president, and some of them have been back on since.

“I can’t tell you how many people said I heard about you on ‘The Breakfast Club,’” Andrew Yang said, describing young supporters who approached him at campaign events around the country. “You seldom feel like there was a direct result from any show. I definitely got the sense that after I was on, there was an impact.”

Charlamagne, Ms. Yee and DJ Envy mastered the long-form podcast style for their radio show before podcasts really took off, and they pride themselves on their candor and on the fact that they ask candidates tough questions about how their policies would affect black people.

“I don’t know too many people that watch a lot of the networks that the candidates go to and I think a lot of people that look like us get a lot of information from us,” DJ Envy said. “They believe in us and they believe we’re going to ask the questions that affect our communities.”

He said he thinks part of the appeal for young people is the way the show breaks politics down. “We play the audio, then we talk about it,” he said. “We don’t just leave it out there for you to guess.”

In an interview at the studio in February, Charlamagne described the primary as “dream selling season,” or a moment when all the candidates would try to appeal to black voters. He said then that Mr. Biden’s lack of effort to speak directly to black people worried him.

“Why would we trust Joe Biden?” he asked, running through aspects of Mr. Biden’s record, such as the crime bill, that he pressed him on in their interview. At the time, former New York Mayor Michael Bloomberg was still considered a 2020 contender. Charlamagne took a critical view of both men’s records on race — and noted that both had declined invitations to appear on the show.

That was days before Mr. Biden won the South Carolina primary, with the overwhelming backing of African-Americans, especially the older voters who have been his consistent supporters. He went on to dominate on Super Tuesday. Mr. Bloomberg dropped out, as did everyone else.

Since her late-February appearance on “The Breakfast Club,” Ms. Ocasio-Cortez has gone from high-profile surrogate for Mr. Sanders to co-chair of the Biden campaign’s climate change task force.

Perhaps he should have asked her advice on other subjects, too. Specifically, how to get ready for a certain high-profile radio appearance.

“The beauty of ‘Breakfast Club’ is you can’t prep for it, especially for electorates like ours where authenticity so important,” Ms. Ocasio-Cortez said. “If you try to rehearse your way into this, it’s the worst possible way to prepare for it. Just center yourself, take a couple of deep breaths, and dive in.” 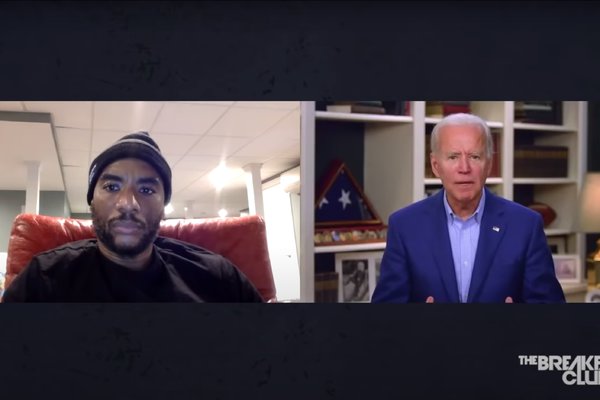 Black Leaders Want a Black Woman as Biden’s Running Mate. But Who? 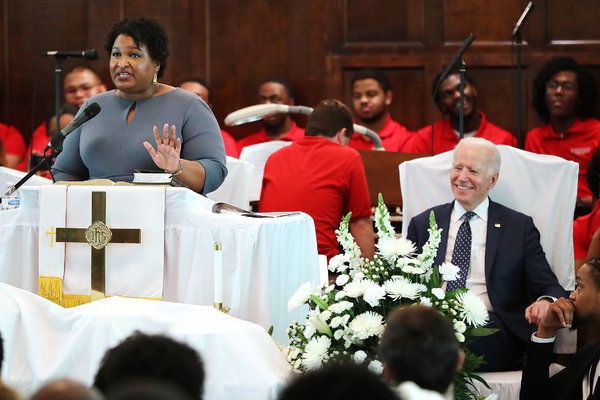 Young Black Voters to Their Biden-Supporting Parents: ‘Is This Your King?’

The WNBA and the NBA approved the sale of the Atlanta Dream on Friday, placing

‘I’m In This For We’: Mckayla Wilkes On Why She’s Challenging Steny Hoyer For His Seat In Congress

Wilkes, a queer Black woman, mother, and essential worker, is part of a wave of