JAY-Z’s Team Roc published an open letter to Georgia officials in today’s issue of the Atlanta Journal-Constitution seeking justice for Ahmaud Arbery. Arbery, 25, was shot and killed while jogging in Brunswick, Georgia. Two months after his death, Gregory and Travis McMichael were finally arrested on charges of murder and aggravated assault.

The letter was signed by JAY-Z, Alicia Keys, Meek Mill, and Yo Gotti. It calls for District Attorney Tom Durden to recuse himself, citing a conflict of interest due to Gregory McMichael’s past as a police officer. It also asks for a fair trial and the naming of William Bryan as an armed accomplice. Read it below.

“Ahmaud was a loving son, a brother and a positive role model in the community,” the letter reads. “He was a human being. He was also African-American which, sadly, means that he was a target. Still. And, on this Mother’s Day—just two days after what would have been Ahmaud’s 26th birthday—we simply cannot and will not stand for another black mother who must spend the day mourning the loss of her black son because of the color of his skin.”

Open letter to Georgia elected officials appearing in the Atlantic Journal-Constitution today, calling for justice to be served in the case of Ahmaud Arbery’s murder. Convict his killers and show the world that hate and fear will lose. #JusticeforAhmaud #iRunWithMaud 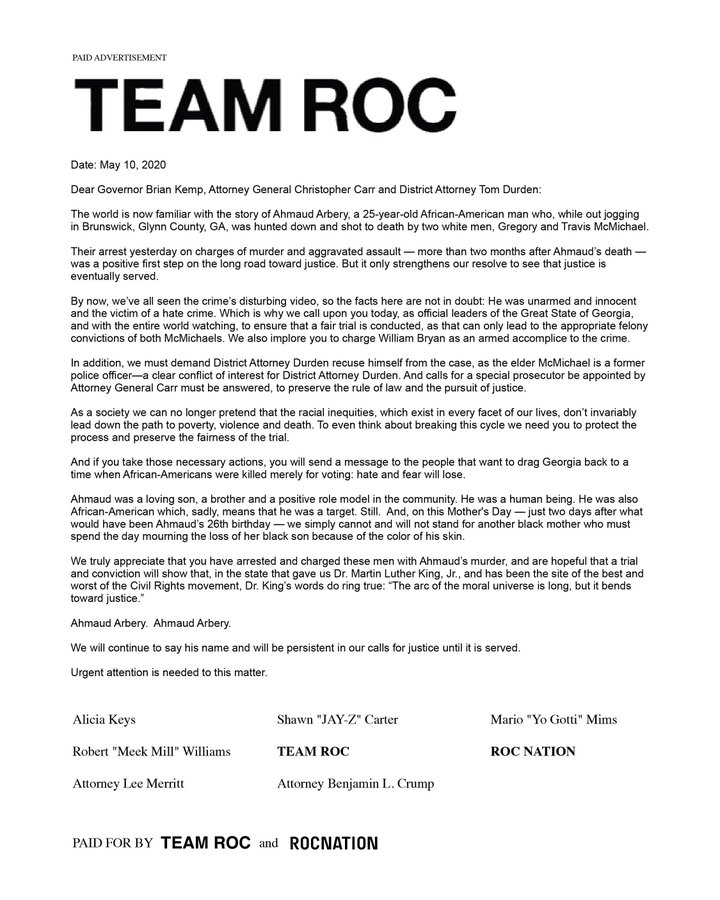